Hey, y'all! As it's Derby season, party food has been immensely on my mind. While designing my menu this year, I wanted to offer a recipe to y'all that requires zero cooking. Yes, that's correct. Zero cooking. How awesome is that? I know that you'll love my Roast Beef Party Appetizer, which features delicious roast beef, a blue cheese spread, and Kentucky-made Henry Bain's Sauce. Your party guests will rave over this recipe - and you will, too! 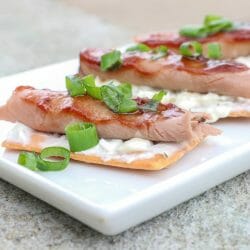 Enjoy the recipe for my Roast Beef Party Appetizer? Check out my other recipes here!

For over a century, The Pendennis Club Original Henry Bain’s Famous Sauce was only available to members and guests of the world-renowned Pendennis Club in Louisville, Kentucky. The Club now shares its signature sauce with the public -- much to my delight.

This fabulous sauce was the creation of the Club’s legendary Maître d’, Henry Bain (1863-1928), who was one of its first employees after the Club’s formation in 1881. He perfected this sauce to complement steaks, local game, and more.

Love my Roast Beef Party Appetizer? Check out my other recipes here!

About the Pendennis Club

The Pendennis Club is a premier, private social club located in Downtown Louisville. The Club has long been regarded as the preeminent social club in Kentucky and one of the premier clubs in the United States. While many legacies follow the Pendennis, the most notable is the Old Fashioned Cocktail. Many locals argue that the cocktail originated at the social club, though there are regular disputes around the claim.

Enjoy my Roast Beef Party Appetizer? Check out my other recipes here!

Hey, y'all! I'm JC - and I thank you for stopping by my nook and cranny of the internet. Sit on down and I'll pour ya a glass of sweet tea! I'm a fiercely loyal southerner, the most devout mayonnaise fan below the Mason-Dixon Line, and pimento cheese's biggest cheerleader. Welcome to my Kentucky Kitchen!