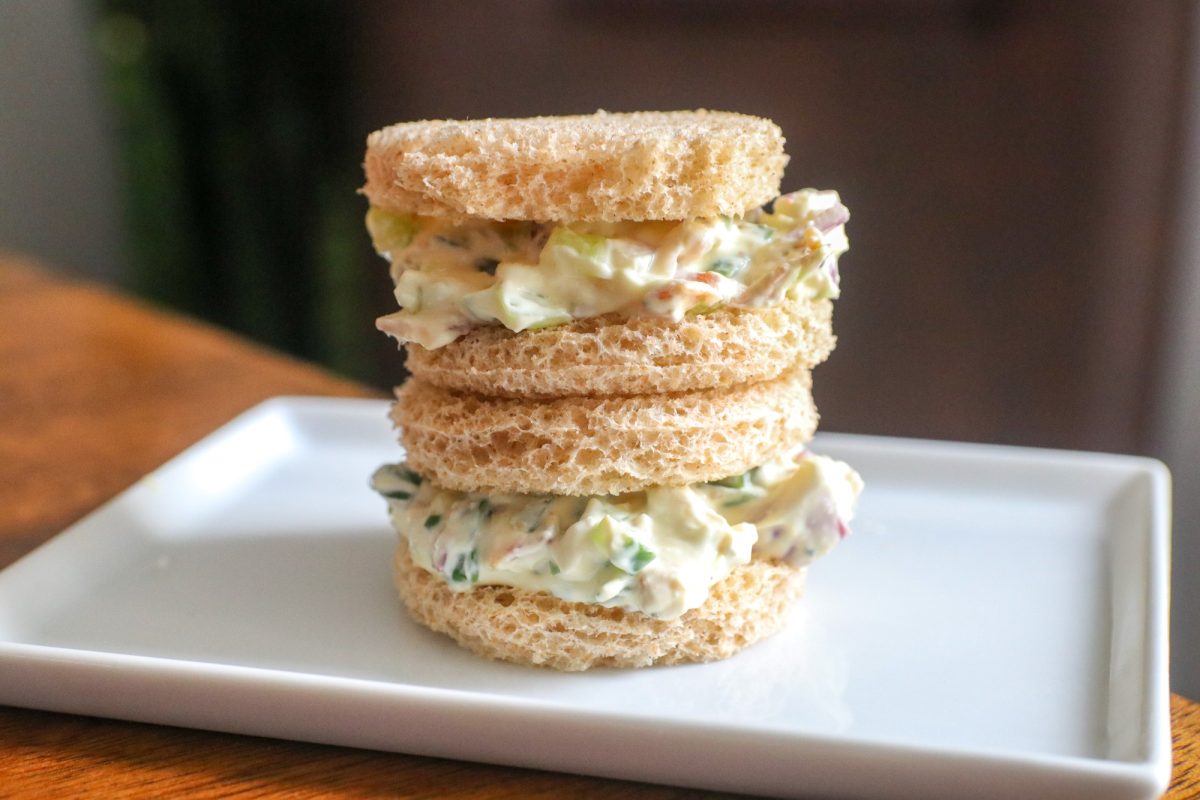 Hey, y’all! Benedictine is a Kentucky legacy and a southern staple; it also happens to be one of my very favorite foods. As such, I’m thrilled to be sharing the recipe for my Bacon and Benedictine Tea Sandwiches with y’all today! Perfect to eat all summer long, this is a wonderful appetizer to serve poolside or at any party. That said, there’s no better party to serve it at than a Kentucky Derby Party & I do hope that you will place it on your menu!

JC’s note: Many recipes, mine included, call for green food coloring. Please note that this is completely optional. Benedictine is traditionally known to be a green spread; however, the cucumbers are not enough to color the batch. I only add 3 drops of food coloring, as I don’t want it to look unnatural. That said, use your own discretion.

Benedictine is both a Kentucky and a southern staple; for the ultimate version, try these Bacon and Benedictine Tea Sandwiches from Kentucky food blogger JC Phelps!
Print Recipe Pin Recipe
Cuisine American

Miss Jennie Benedict invented her savory spread – now known as Benedictine – in a one-room kitchen around the turn of the 20th century. She famously served it to Louisville high society and workers alike and it became her namesake years later.

Benedictine, though created in Louisville, is popular around the state and is most commonly served at garden parties, bridal showers, and Derby Parties. If you’re hosting a meal in the Commonwealth of Kentucky, it would take nerve to not have Benedictine on the menu!

Benedictine is most popularly prepared as a small tea sandwich; that said, it can also be served with crackers, baguettes, and vegetables. Some people even use it to stuff potatoes!

No matter how you serve it, it’s a refreshing dish – and I do hope that you will love my Bacon and Benedictine Tea Sandwiches!

From my Kentucky Kitchen to your plate – enjoy!

Did you enjoy my Bacon and Benedictine Tea Sandwiches? Read my other blog posts here.

Grocery Store Hacks: More Ways To Save At Your Local Kroger

Kentucky Derby Bars: A Southern Dessert Made With Happy Eggs